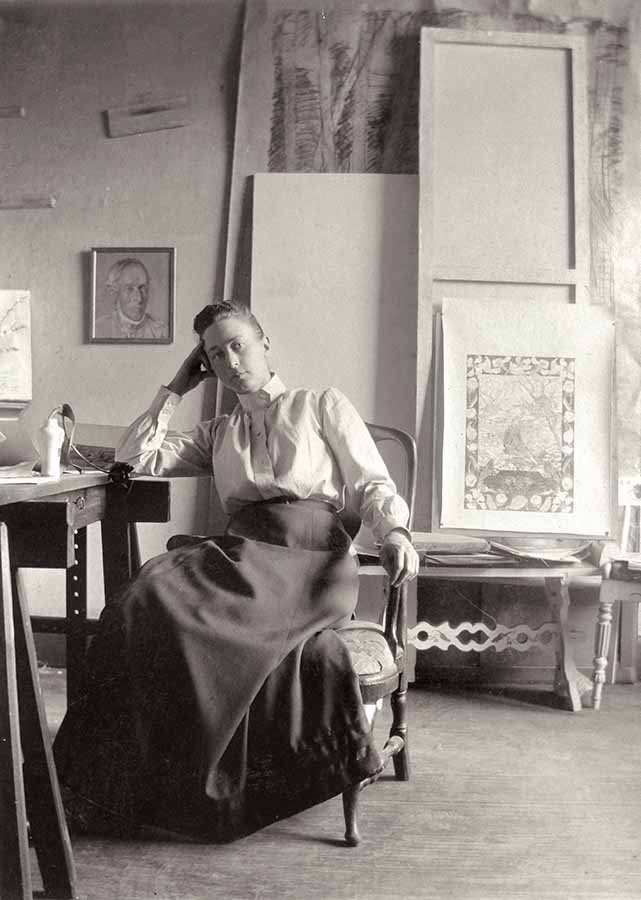 Hilma af Klint (1862-1944) is one of Sweden’s most esteemed artists. Today she is celebrated all over the world.

Born in Stockholm, Hilma af Klint studied at the city’s Royal Academy of Fine Arts, graduating with honours in 1887. She established herself as a respected artist in Stockholm, exhibiting figurative paintings and serving briefly as secretary of the Association of Swedish Women Artists. Already at a young age she became involved in spiritualism. Later followed a keen interest in the ideas of Rosicrucianism, Theosophy and Anthroposophy. These modes of spiritual engagement were part of the zeitgeist and popular across Europe – especially in artistic and literary circles – as people sought to reconcile religious beliefs with scientific advances and a new awareness of the plurality of religions.

Af Klint’s conventional paintings became the source of financial income, but what she refers to as the “great work”, realised during her life, remained a separate activity. Only spiritually interested audiences had any knowledge of this body of works. Her attempts to exhibit these paintings to like-minded individuals remained largely unsuccessful and remarks in her notebooks indicate that she felt that the world was not quite ready for the message they were intended to communicate.

At the Academy of Fine Arts, af Klint befriended Anna Cassel, one of the four women with whom she established The Five, a group exploring spiritual realms through meditation and séances. The other members were Cornelia Cederberg, Sigrid Hedman and Mathilda Nilsson, all of whom had been members of the Edelweiss Society, a Stockholm association that combined Christian ideas, theosophical teachings and spiritualism. The Five, active between 1896 and 1908, recorded messages from higher spirits referred to as The High Masters. In trancelike states, the group believed they could communicate with mystic beings with names such as Amaliel, Ananda and Gregor – understood to be intermediaries of The High Masters – transcribing their messages via automatic writing and drawing.

In 1907, af Klint claimed to have received a message indicating that she should be the leader of the group. The other four refused to accept this new order and soon the group disintegrated and ceased to work collectively. From this point on af Klint focused entirely on the great commission known as The Paintings for the Temple, her most important body of works. 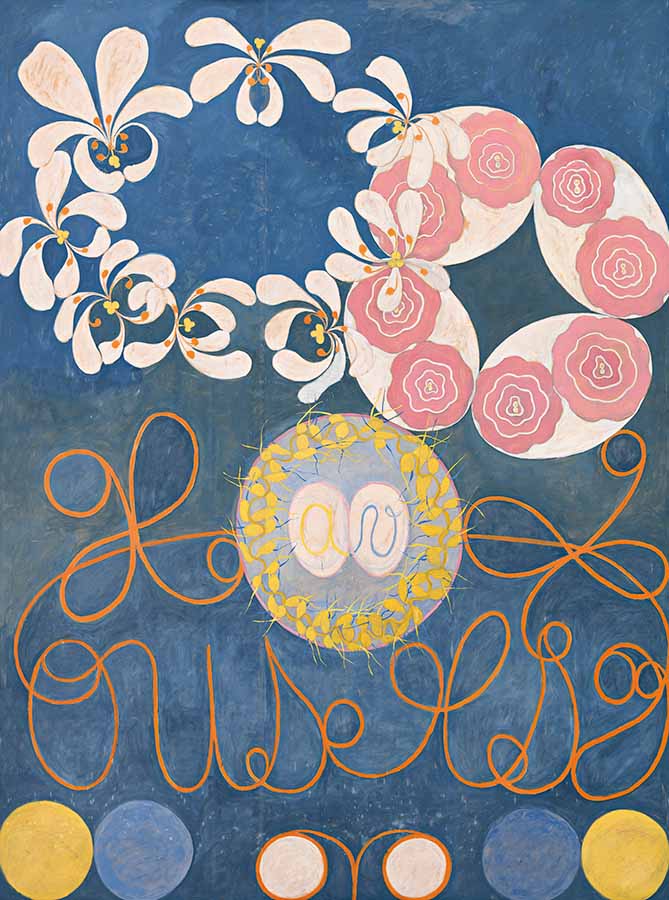 Around the turn of the twentieth century, Stockholm was visited by the leading representatives of various spiritual movements. Af Klint attended lectures by theosophists Annie Besant and Rudolf Steiner and her library contained the key theosophical writings by Madame Blavatsky and a large number of works by Steiner. Later she became an active member of the Anthroposophical Society, founded in 1913. In the 1920s she spent long periods in Dornach, Switzerland, where Steiner had established the movement’s centre, the Goetheanum.

During her lifetime, af Klint’s conventional paintings were included in numerous exhibitions. Her non-figurative works, however, were only shown in anthroposophical and theosophical contexts. After her passing it took decades until her art gained any serious attention. In 1986, the Los Angeles County Museum of Art (LACMA) included her works in the survey exhibition The Spiritual in Art: Abstract Painting 1890-1985. Since then interest in her esoteric paintings has grown and today her work is displayed at important museums across the world on a regular basis. In the autumn of 2018, Hilma af Klint: Paintings for the Future at the Guggenheim museum in New York became the best attended exhibition in the history of the institution.

An ambitious inquiry initiated by the Foundation established that Hilma af Klint (1862-1944) was a disciple of Anthroposophy .

The inquiry explains aspects of the Foundations statues and the strong influence of the Anthroposophical society. 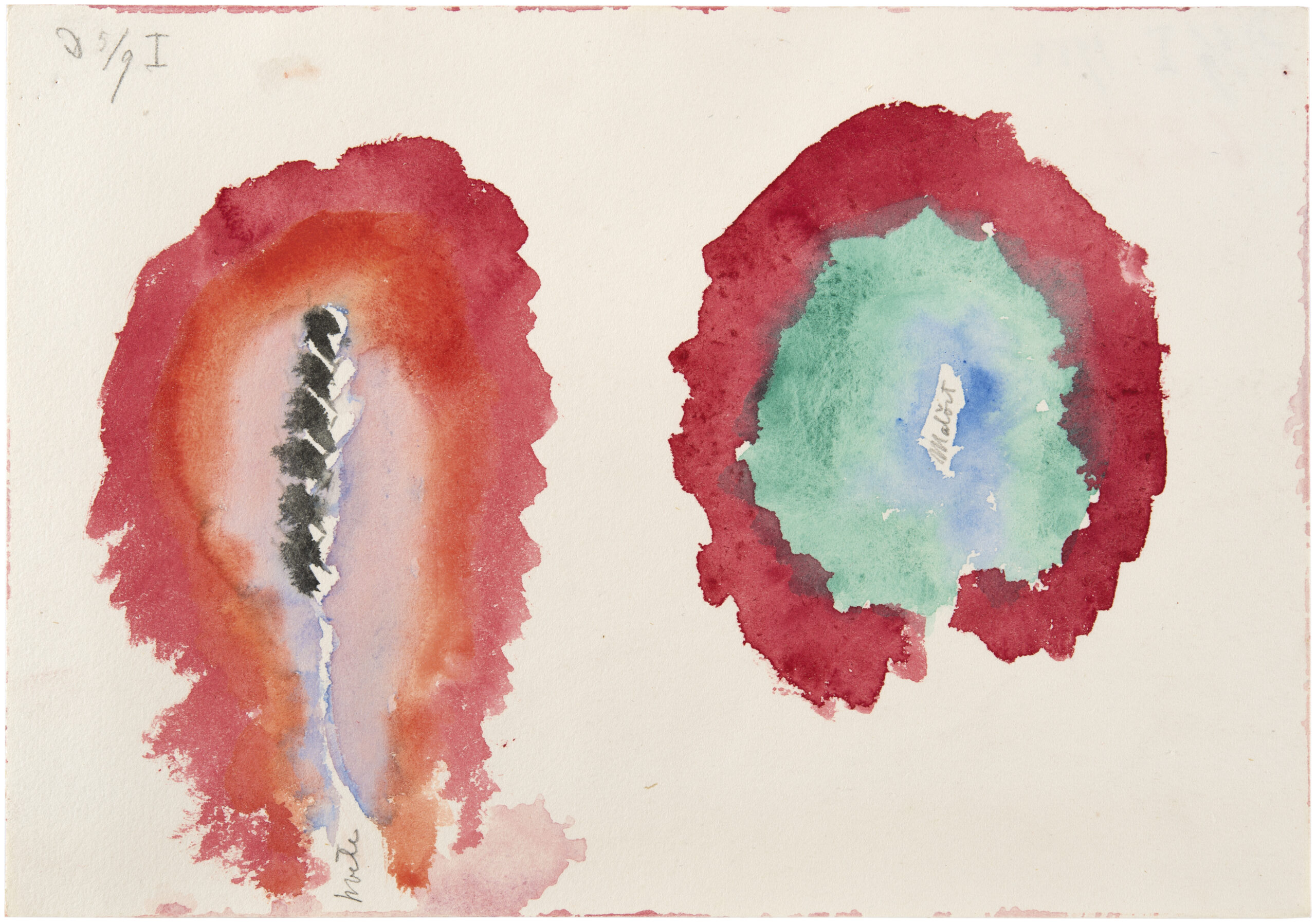 1862
Hilma af Klint is born on 26 October at the Karlberg Palace in Solna outside Stockholm.

1880
Her sister Hermina dies at the age of ten.

1886–1914
Shows conventional paintings in more than two dozen exhibitions, most of which were organised by the Swedish Association for Art (Sveriges Allmänna Konstförening).

1888
Awarded a prize at the Academy for painting from the human model, probably for her oil painting Andromeda at the Sea, which she submitted to the Academy’s competition.

1891
Receives messages from spiritual beings for the first time.

1896
Becomes a member of the spiritual circle the Edelweiss Society (Edelweissförbundet). During a séance the spiritualistic group The Five (De Fem) is founded, consisting of Sigrid Hedman, Cornelia Cederberg, Mathilda Nilsson, Anna Cassel and Hilma af Klint.Their meetings are recorded in notebooks with texts and automatic drawings.

1899
Moves with her mother to Brahegatan 52 in Stockholm.

1900–1901
In collaboration with Anna Cassel, illustrates a book on horse surgery written by John Vennerholm, the director of the Veterinary Institute in Stockholm.

1903
Travels to Germany with Anna Cassel and most likely visits Italy during the same trip.

1904
First receives predictions, from the spiritual being Ananda, about the execution of “astral paintings”. Joins the Theosophical Society in May.

1906
In January, the spiritual being Amaliel offers her a commission, which she accepts immediately. After a period of preparation, in November she commences the cycle The Paintings for the Temple with its first series Primordial Chaos.

1907
Paints the series Eros, The Great Figure Paintings and The Ten Largest. She also works in a shared large studio at Hamngatan 5, Stockholm, above Blanch’s Café.

1908
The Five undergoes a crisis and dissolves in early 1908. The Group of Thirteen emerges instead over the years. Hilma af Klint paints three more series, including The Evolution. By April, the first section of The Paintings for the Temple comprises 111 paintings. Her mother goes blind and Hilma af Klint gives up her studio. Meets Rudolf Steiner in Sweden for the first time, at his March 1908 lecture about his new Rosicrucian teachings. Starts to develop a lifelong interest in Rudolf Steiner’s teachings.

1910
Probably in January 1910, she shows Rudolf Steiner works belonging to The Paintings for the Temple. Steiner gives a series of lectures in Stockholm (3-15 January) and a course on the Gospel of John. Af Klint joins the Association of Swedish Women Artists (Föreningen Svenska Konstnärinnor) and was the secretary until 22 April 1911. Paints portraits of physicist Knut Ångström and linguist Johan August Lundell.

1913
Buys the lake house Furuheim on the island of Munsö. Paints the US Series and begins the Tree of Knowledge Series. Exhibits seventeen spiritual paintings in an art exhibition organised by the Theosophical Society in Stockholm in June, in which Anna Cassel also participates.

1914
Exhibits a naturalistic academic painting in the Baltic Exhibition in Malmö. The First World War breaks out and af Klint begins her series The Swan. Rents various studios in Stockholm, including at Eriksbergsgatan (1914–15) and at Ynglingagatan (1915–16).

1915
Completes The Tree of Knowledge and The Swan. Her series The Dove follows, then Altarpieces – completing the cycle The Paintings for the Temple, which now comprises 193 paintings.

1917
The building of the studio house on Munsö is completed. Paints the series The Atom. In a two-thousand-page volume, Studies of the Life of the Soul (Studier över Själslivet), she describes her thoughts on spiritual life.

1918
Moves to Munsö, together with her mother and nurse Thomasine Andersson, who becomes her lifelong friend and partner.

1919
Begins the creation of Flowers, Mosses and Lichen in German, in collaboration with Thomasine Andersson.

1920
Her mother dies. She creates Series II, a group of works on different world religions. In October she takes her first trip to Dornach, Switzerland, together with Thomasine Andersson – by 1930 they will have undertaken eight more such journeys. Af Klint becomes a lifelong member of the Anthroposophical Society on 20 October . During one of her sojourns in Dornach she shows the ten Blue Books to Steiner and notes down his comments. The books contain a watercolour miniature of all her works from Paintings for the Temple, each paired with a black-and-white photograph of the painting.

1922
Paints almost exclusively in watercolour using the wet-on-wet technique, completing over four hundred works by 1941. On New Year’s Eve, the Goetheanum in Dornach burns down.

1924
Writes to Rudolf Steiner on 24 April asking for advice on where her paintings could be of use. According to her notes for a lecture at the Anthroposophical Society in Stockholm on 9t December 1924, Steiner tells her she should not destroy her paintings as they could be of use. Steiner dies in spring 1925.

1926
Moves to Uppsala with Thomasine Andersson. Begins editing and revising her old notebooks.

1927
Travels to Amsterdam in November. Donates her notebook Flowers, Mosses and Lichen and the series Tree of Knowledge to the Goetheanum in Dornach.

1928
Travels to London in July and exhibits works from the cycle The Paintings for the Temple at the World Conference of Spiritual Science, organised by the English Anthroposophical Society.

1931
Develops sketches for a spiral-shaped temple building, which is intended to be built on the island of Ven in Öresund. Over the years many more sketches and notes on this project follow. Moves to Helsingborg in southern Sweden with Thomasine Andersson.

1932
Hilma af Klint marks many notebooks, including the Blue Books that contain the Paintings for the Temple with an X, indicating that they may not be opened until twenty years after her death. She writes on her plan to construct “a museum to show what lies behind the forces of matter” and paints the watercolours The Blitz over London and The Outbreak of War in Spain and the Naval Battles in the Mediterranean.

1937
Lectures at the Anthroposophical Society in Stockholm on 16 April, asking them to make use of her paintings. Argues for the legitimacy of her mediumistic method and insists that it is compatible with Steiner’s teaching. Anna Cassel dies.

1938
Erik af Klint (1901–1981) visits her on 20 August. She shows The Paintings for the Temple and her other works in the studio on Munsö and explains their meaning.

1943
Declines an offer by artist Tyra Kleen to keep the The Paintings for the Temple in a new building of the Protestant Sigtuna Foundation. ”To put it into hands of people not anthroposophical inclined” would not be possible, she writes to Tyra Kleen. Af Klint is called a “mystic” by her spiritual ambassadors.

1944
Moves in August to her cousin Hedvig af Klint at Ösby, Djursholm, a suburb of Stockholm. Hilma af Klint dies on 21 October after a streetcar accident. Her nephew Erik af Klint inherits her work some 1300 paintings and 124 notebooks comprising more than 26,000 handwritten and typed pages.